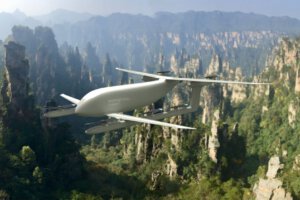 AJDOVŠČINA, SLOVENIA – 1 September 2020: Pipistrel, the pioneer of Type Certified electric aviation, is presenting the Nuuva V300 as the flagship model of the Nuuva series of unmanned air vehicles (UAV). This one‑of‑a‑kind aircraft embodies our vision to disrupt aerial cargo transportation by commercializing the use of electrical vertical take-off and landing (eVTOL) vehicles. The highly customizable autonomous aircraft can carry up to 460 kg, is easy and economical to operate, and offers the efficiency and reliability of electric powertrains. Entry into service is planned for the second half of 2023.

Currently, precious cargo is delivered to many locations around the world with helicopters, which are excellent for hovering but much less efficient in cruise flight, as they rely solely on their rotor(s) to provide the necessary lift. Their complex flight mechanics also results in a high number of moving parts, requiring frequent maintenance and inspection, further increasing the costs of operation.

The Nuuva family combines the best of both aeroplane and helicopter air cargo transportation principles. The unmanned eVTOL capability enables it to go where no aeroplane is able to, while its hybrid configuration allows it to operate at a fraction of the cost of a helicopter on an equivalent mission. The Nuuva V300, with its simplicity, efficiency, and autonomy, is targeting to deliver a 10x improvement in economics to the operator.

Reliable and simple to operate

The large cargo compartment accepts up to 3 Euro-pallets (EPAL) that can be easily loaded with a regular forklift. The Nuuva V300 then flies a preloaded flight plan fully autonomously, controlled by a highly reliable digital flight control system. Continuous communication allows the ground operator, who manages the vehicle with simple mouse-clicks, to have ultimate control in case of changes or cancellation of the flight.

The Nuuva V300 takes-off and lands using eight independent battery-powered Pipistrel E-811 electric engines, already Type Certified. The whole system is safeguarded by the integrated health self‑monitoring system that alerts of any potential malfunction even before it occurs, increasing the reliability and safety. Nuuva V300’s batteries can be charged by simply plugging-in to a SkyChargeTM by Pipistrel and Green Motion charging station.

A dependable and proven internal combustion engine in the aft fuselage powers the aircraft in cruise flight, offering unbeatable fuel economy and low maintenance costs. A unique tandem-wing configuration with fly-by-wire control surfaces boosts the aerodynamic efficiency and reduces the landing footprint of the vehicle, while assuring a wide centre-of-gravity margin.

Flexibility at a low cost

The Nuuva V300 can be customized for a wide range of missions. For operators that prioritize longer range, the vehicle’s payload capacity and anti-ice capabilities can be traded-off for more usable fuel, being able to transport 50-kg payload for as far as 2,500 km – all this without compromising the ability to take-off and land vertically from altitudes as high as 8,000 ft. At lower take-off altitudes and with shorter mission requirements, the payload can be increased to up to 460 kg, beating the coveted 1,000 lb threshold.

The smaller sibling of the Nuuva family, the V20, shares the same architecture and advantages of the larger V300 but is designed as a lightweight cargo courier carrying payloads of up to 20 kg. First customers will be able to take deliveries as early as 2021.

Integrate the Nuuva aircraft into your business

Pipistrel encourages prospective customers, operators, and investors to discuss customization options, further developments, and purchase possibilities. If you would like to know more about the Nuuva solutions and how they can adapt to your business, visit the Nuuva V300 page and fill the contact form. A Pipistrel representative will contact you soon. 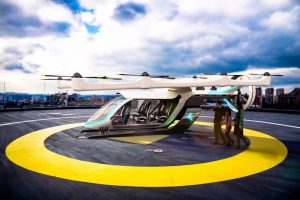 EmbraerX is engaged in several projects, including the development of eVTOL concepts through a cooperation with Uber and other companies to explore business opportunities within the Uber Elevate ecosystem. “We have excelled in our near-50-year journey by introducing innovations into the aviation industry and delivering true value to customers,” said Paulo Cesar de Souza e Silva, President and CEO of Embraer. “We are relentless in our quest for constant growth and through EmbraerX we will drive disruptive innovation and accelerate the creation of new businesses with the potential for exponential growth. Urban mobility is ripe for transformation and we are committed to having a major role in this key market.”

The eVTOL concept presented at Uber Elevate 2018 represents an aircraft with a mission to serve passengers in an urban environment, based on the key design drivers of safety, passenger experience, affordability and a very low footprint for the community, in terms of noise and emissions. “We are developing solutions to bring on-demand air transportation to urban areas to improve quality of life for millions of people. Our collaboration with key stakeholders will accelerate the arrival of this new ecosystem,” said Antonio Campello, President & CEO of EmbraerX. “This is one example of how EmbraerX is committed to exploring a range of disruptive products and services that could revolutionize the business of air transportation.”

Embraer X’s first eVTOL concept unveiled today is the outcome of extensive interaction with potential urban air travelers about their desired experience, combined with the expertise of Embraer’s teams and the collaboration with various companies and institutions. Embraer X will continue to engage with communities to expedite the development of desired solutions for this new market. Over the last five decades, Embraer has designed, developed and certified close to 50 aircraft models, delivering over 8,000 aircraft to 100 countries. 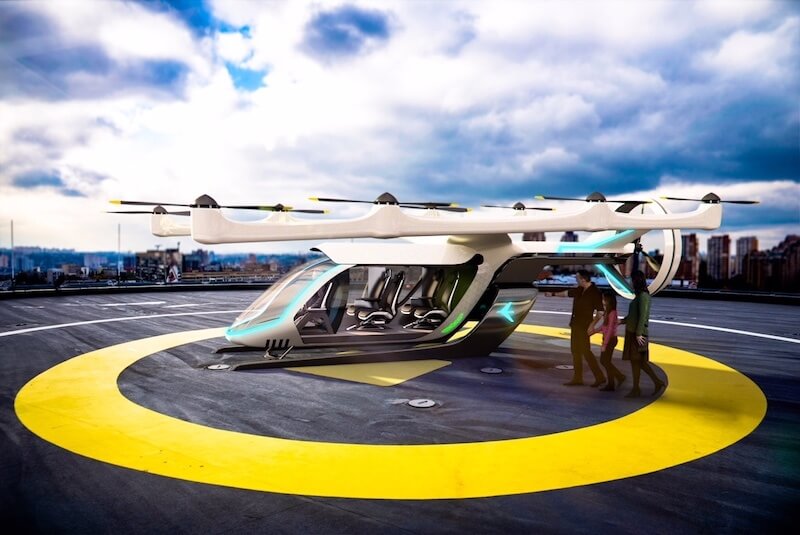