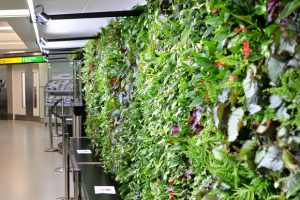 Heathrow, October 10, 2016: Passengers flying from Terminal 3, Gate 25, will now be treated to a garden of 1,680 plants. Heathrow’s new “Garden Gate,” installed by urban greening specialists Biotecture, will be trialled for the next 6 months. If the trial is a success, Heathrow will explore implementing Garden Gates across the airport.

The Garden Gate is comprised of 7 panels,  1.8m high x 2.4m wide, each containing 240 plants. Each plant panel is fitted with a water reservoir and nutrient system which allows the wall to flourish for an extended period of time in an artificial environment. Advancements in LED technology enables indoor plant growth using less energy (e.g. more light and less heat).

The plant selection is largely based on early research conducted by Dr Bill Wolverton on behalf of NASA to prove that plants, namely the English Ivy and the Peace Lily, absorbed the air around them, translocated it to their roots, where organisms turned some air particles into food for the plant.

Heathrow’s new Garden Gate is its latest effort to make every journey better, following a record-breaking first half of 2016 which saw the highest passenger satisfaction scores to date. It will provide an eco-sanctuary within Britain’s busiest airport. Academic research points to a correlation between calm, comfort and relaxation and exposure to plants.

Emma Gilthorpe, Strategy Director at Heathrow says: “We are proud to have received our best ever passenger service scores to date this summer, but we are always keen to make our passengers’ journeys better.  With our new Garden Gate, our passengers can enjoy a natural sanctuary of rest and relaxation as they make their way through the airport, with 1,680 plants ready to see them on their way.” 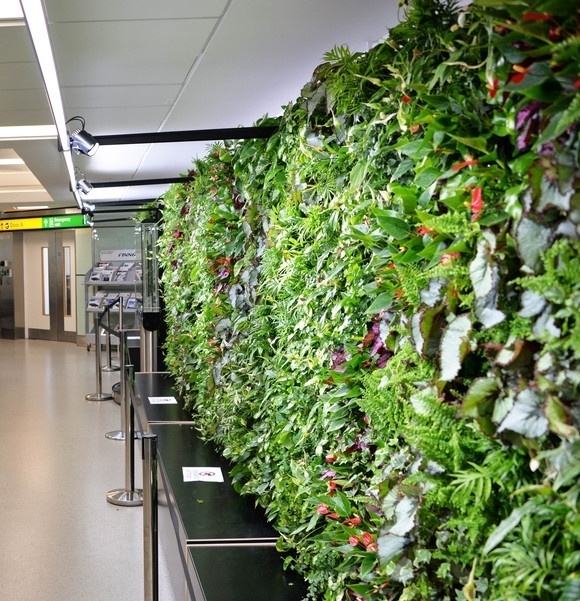 Flying testbed to reduce fuel use, emissions and noise


Washington, D.C., June 17, 2016: With 14 electric motors turning propellers and all of them integrated into a uniquely-designed wing, NASA will test new propulsion technology using an experimental airplane now designated the X-57 and nicknamed “Maxwell”.

NASA Administrator Charles Bolden highlighted the agency’s first X-plane designation in a decade during his keynote speech Friday in Washington at the American Institute of Aeronautics and Astronautics (AIAA) annual Aviation and Aeronautics Forum and Exposition, commonly called Aviation 2016.

“With the return of piloted X-planes to NASA’s research capabilities – which is a key part of our 10-year-long New Aviation Horizons initiative – the general aviation-sized X-57 will take the first step in opening a new era of aviation,” Bolden said.

As many as five larger transport-scale X-planes also are planned as part of the initiative. Its goals – like the X-57 – include demonstrating advanced technologies to reduce fuel use, emissions and noise, and thus accelerate their introduction to the marketplace.

The X-57 number designation was assigned by the U.S. Air Force, which manages the history-making process, following a request from NASA. The first X-plane was the X-1, which in 1947 became the first airplane to fly faster than the speed of sound.

“Dozens of X-planes of all shapes, sizes and purposes have since followed – all of them contributing to our stature as the world’s leader in aviation and space technology,” said Jaiwon Shin, associate administrator for NASA’s Aeronautics Research Mission Directorate. “Planes like the X-57, and the others to come, will help us maintain that role.”

NASA researchers working directly with the electric airplane also chose to name the aircraft “Maxwell” to honor James Clerk Maxwell, the 19th century Scottish physicist who did groundbreaking work in electromagnetism. His importance in contributing to the understanding of physics is rivaled only by Albert Einstein and Isaac Newton.

Its original wing and two gas-fueled piston engines will be replaced with a long, skinny wing embedded with 14 electric motors – 12 on the leading edge for take offs and landings, and one larger motor on each wing tip for use while at cruise altitude.

NASA’s aeronautical innovators hope to validate the idea that distributing electric power across a number of motors integrated with an aircraft in this way will result in a five-time reduction in the energy required for a private plane to cruise at 175 mph.

Several other benefits would result as well. “Maxwell” will be powered only by batteries, eliminating carbon emissions and demonstrating how demand would shrink for lead-based aviation fuel still in use by general aviation.

Energy efficiency at cruise altitude using X-57 technology could benefit travelers by reducing flight times, fuel usage, as well as reducing overall operational costs for small aircraft by as much as 40 percent. Typically, to get the best fuel efficiency an airplane has to fly slower than it is able. Electric propulsion essentially eliminates the penalty for cruising at higher speeds.

The X-57 research started as part of the NASA Aeronautics Research Mission Directorate’s Transformative Aeronautics Program’s Convergent Aeronautics Solutions project, with the flight demonstrations being performed as part of the Flight Demonstration Concepts project in the Integrated Aviation Systems Program. As a previous part of the program, NASA researchers performed ground testing of a 31-foot-span, carbon composite wing section with 18 electric motors powered by lithium iron phosphate batteries. The experimental wing, called the Hybrid-Electric Integrated Systems Testbed (HEIST), is mounted on a specially modified truck. Testing on the mobile ground rig assembly will provide valuable data and risk reduction applicable to future flight research. Instead of being installed in a wind tunnel, the HEIST wing section will remain attached to load cells on a supporting truss while the vehicle is driven at speeds up to 70 miles per hour across a dry lakebed at Edwards Air Force Base. 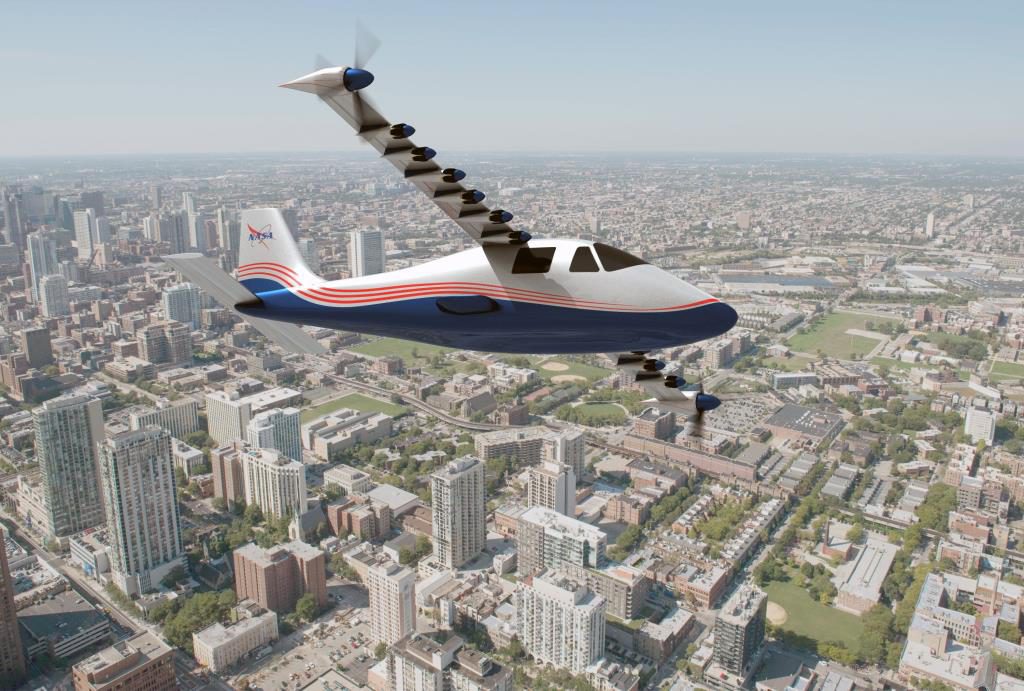 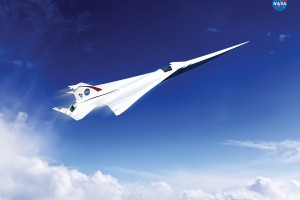 Arlington, February 29, 2016: The return of supersonic passenger air travel is one step closer to reality with NASA’s award of a contract for the preliminary design of a “low boom” flight demonstration aircraft. This is the first in a series of ‘X-planes’ in NASA’s New Aviation Horizons initiative, introduced in the agency’s Fiscal Year 2017 budget.

NASA Administrator Charles Bolden announced the award at an event Monday at Ronald Reagan Washington National Airport in Arlington, Virginia: “NASA is working hard to make flight greener, safer and quieter – all while developing aircraft that travel faster, and building an aviation system that operates more efficiently,” said Bolden. “To that end, it’s worth noting that it’s been almost 70 years since Chuck Yeager broke the sound barrier in the Bell X-1 as part of our predecessor agency’s high speed research. Now we’re continuing that supersonic X-plane legacy with this preliminary design award for a quieter supersonic jet with an aim toward passenger flight.”

NASA selected a team led by Lockheed Martin Aeronautics Company of Palmdale, California, to complete a preliminary design for Quiet Supersonic Technology (QueSST). The work will be conducted under a task order against the Basic and Applied Aerospace Research and Technology (BAART) contract at NASA’s Langley Research Center in Hampton, Virginia.

After conducting feasibility studies and working to better understand acceptable sound levels across the country, NASA’s Commercial Supersonic Technology Project asked industry teams to submit design concepts for a piloted test aircraft that can fly at supersonic speeds, creating a supersonic “heartbeat” — a soft thump rather than the disruptive boom currently associated with supersonic flight.

“Developing, building and flight testing a quiet supersonic X-plane is the next logical step in our path to enabling the industry’s decision to open supersonic travel for the flying public,” said Jaiwon Shin, associate administrator for NASA’s Aeronautics Research Mission.

The company will develop baseline aircraft requirements and a preliminary aircraft design, with specifications, and provide supporting documentation for concept formulation and planning. This documentation would be used to prepare for the detailed design, building and testing of the QueSST jet. Performance of this preliminary design also must undergo analytical and wind tunnel validation.

In addition to design and building, this Low Boom Flight Demonstration (LBFD) phase of the project also will include validation of community response to the new, quieter supersonic design. The detailed design and building of the QueSST aircraft, conducted under the NASA Aeronautics Research Mission Directorate’s Integrated Aviation Systems Program, will fall under a future contract competition.

NASA’s 10-year New Aviation Horizons initiative has the ambitious goals of reducing fuel use, emissions and noise through innovations in aircraft design that departs from the conventional tube-and-wing aircraft shape.

The New Aviation Horizons X-planes will typically be about half-scale of a production aircraft and likely are to be piloted. Design-and-build will take several years with aircraft starting their flight campaign around 2020, depending on funding. 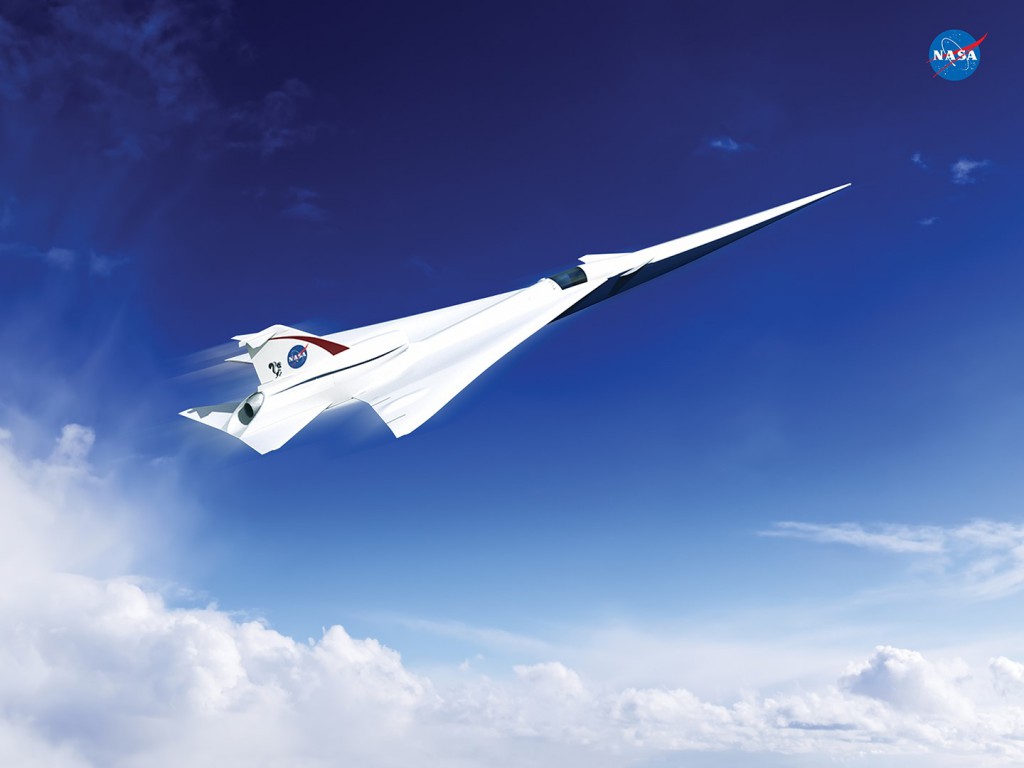 This is an artist’s concept of a possible Low Boom Flight Demonstration Quiet Supersonic Transport (QueSST) X-plane design. The award of a preliminary design contract is the first step towards the possible return of supersonic passenger travel – but this time quieter and more affordable. Credits: Lockheed Martin