Singapore, 22 October 2019 – Volocopter, the pioneer in Urban Air Mobility (UAM), successfully completed its first manned flight over Singapore’s Marina Bay today. This was the last trial of a demanding test series to verify and validate the ability of Volocopter air taxis to fly over the area. Government authorities including the Ministry of Transport (MOT), the Civil Aviation Authority of Singapore (CAAS), and the Economic Development Board (EDB) supported Volocopter in this testing phase and will continue to do so in the future. This flight kicks-off Volocopter’s efforts to bring commercial air taxi services to Singapore.

“A 2X model of the company’s test series flown by a pilot onboard was used. The flight covered a distance of approximately 1.5 km and lasted for two minutes at an average cruising height of 40 m.

“The flight today in Singapore was the most advanced Volocopter flight yet and the piloted flight was as stable as ever. At the same time, we are showcasing a prototype of our full-scale VoloPort Infrastructure, allowing for a realistic demonstration of air taxi boarding and maintenance services. Never before have people been this close to experiencing what Urban Air Mobility in the city of tomorrow will feel like,” says Florian Reuter, CEO of Volocopter.

Leading up to the flight, the aircraft had undergone intensive testing in Germany for several months. Following which, a rigorous flight test program to verify the Volocopter 2X aircraft performance under local environment was conducted at Seletar Airport in accordance with CAAS.

“Since late 2018, the Civil Aviation Authority of Singapore (CAAS) has been working with Volocopter to facilitate this flight in Singapore. The Volocopter team went through a series of stringent evaluations to ensure that all the necessary safety requirements were met before the flight was allowed to take place. By working closely with companies such as Volocopter, we hope to facilitate innovations for beneficial uses whilst ensuring aviation and public safety,” said Mr. Ho Yuen Sang, Director (Aviation Industry) from CAAS.

“Volocopter’s decision to testbed its innovative air taxi in Singapore is testament to the opportunities and environment that Singapore provides. The Singapore Economic Development Board hopes to be an enabling partner for companies developing new mobility technologies such as autonomous vehicles and urban aerial mobility. We are happy to support Volocopter in their development plans and hope that this is a first step towards the creation of more exciting business and job opportunities in Singapore,” said Mr. Tan Kong Hwee, Assistant Managing Director, EDB.

At the ITSWC, Volocopter and their partner Skyports built the first VoloPort prototype on the floating dock in Marina Bay. VoloPorts are the only physical infrastructure required for air taxis and they are one important step to commencing operations in cities. They are designed to provide passengers with a seamless air taxi experience that is safe, secure, and integrated into existing infrastructure.

Volocopter opened an office in Singapore in January 2019 and has started to build up a local team to support South East Asia expansion plans. The company has recently presented their VoloCity – the next generation eVTOL air taxi which is designed to comply with EASA requirements. With their recently announced Series C funding round the company will bring the VoloCity to commercial certification. 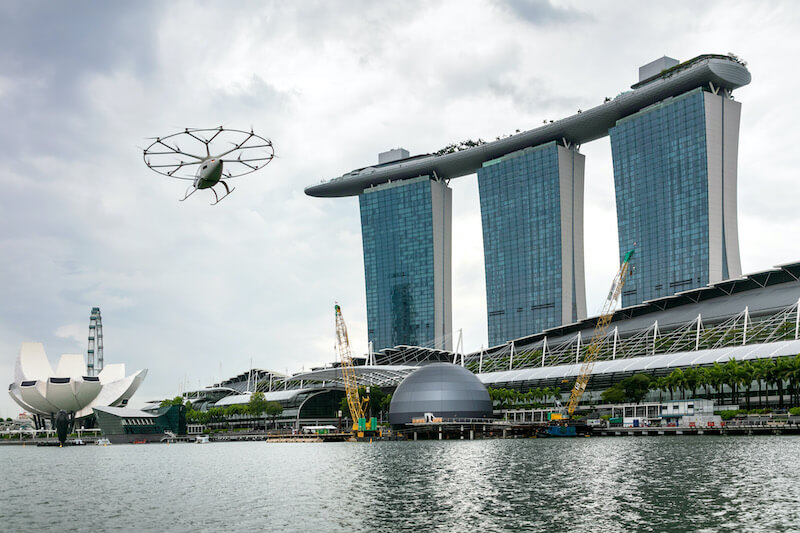 Volocopter is building the world’s first sustainable and scalable urban air mobility business to bring affordable air taxi services to megacities worldwide. With the VoloCity, the company is developing the first fully electric “eVTOL” aircraft in certification to safely and quietly transport passengers within cities. Volocopter leads and cooperates with partners in infrastructure, operations, and air traffic management to build the ecosystem necessary to ‘Bring Urban Air Mobility to Life’.

In 2011, Volocopter performed the first-ever manned flight of a purely electric multicopter and has since showcased numerous public flights with its full-scale aircraft. The most notable have been the flight at the CES 2018 in Las Vegas and the world’s first autonomous eVTOL flight in Dubai 2017.

Founded in 2011 by Stephan Wolf and Alexander Zosel, Volocopter has 150 employees in offices in Bruchsal, Munich, and Singapore. The company is managed by CEO Florian Reuter, CTO Jan-Hendrik Boelens, and CFO Rene Griemens, and has raised a total of 85 million euro in equity. Volocopters‘s investors include Daimler, Geely, Intel Capital, BtoV, and Manta Ray Ventures. Find out more at: www.volocopter.com