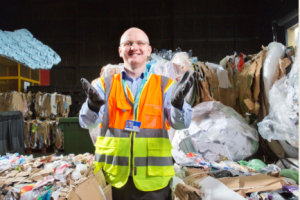 Gatwick’s world-first waste plant has been shortlisted for a prestigious Sustainability Leaders Award the airport announced today – as Gatwick becomes one of first signatories to the international Airports Sustainability Declaration.

The awards are run by Edie – leading providers of environmental news and commentary – and Gatwick has been shortlisted after becoming the first airport in the World able to dispose of Category 1 waste on site and convert it into energy – an issue that costs the global aviation sector around £500 million a year.

Category 1 forms the majority of waste from non-EU flights and is defined as food waste or anything mixed with it – such as packaging, cups, meal trays – from international transport vehicles.

Its disposal is governed by strict rules that – until now – require specialist processing offsite to protect against the potential spread of disease and infectious material.

From November however Gatwick’s new £3.8million processing plant – delivered in partnership with DHL – will not only dispose of this waste safely on site, it will also convert it – and all other organic waste – into energy to power the new plant and heat the North Terminal.

Gatwick currently treats 2,200 tonnes of Category 1 waste each year – around 20% of the total generated at the airport (10,500 tonnes) – and the new energy plant will process around 10 tonnes a day.

The plant also includes a waste sorting centre as Gatwick brings responsibility for sorting in-house to maximise the amount recycled – a move that will boost the airport’s recycling rate to around 85% by 2020 – higher than any UK airport currently and up from 49% today.

The Airports Sustainability Declaration was signed by Gatwick yesterday at the Airports Going Green Conference at Amsterdam’s Schiphol Airport.  The declaration has been designed to strengthen worldwide collaboration between airports to improve the sharing of environmental innovation, knowledge and best practice.

“Being short listed is recognition of the work we have put in to get to this stage, but we will not stop here.

“We are already looking at making this waste plant bigger to cope with the growth in our passenger numbers in coming years.  We are also exploring how our construction waste can be reused and recycled as much as possible to help us reduce the amount of carbon we use.” 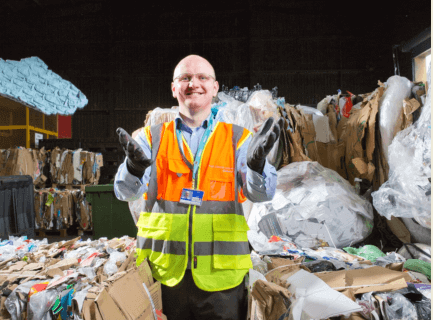 The edie Sustainability Leaders Awards are included in the highly regarded RSA accreditation scheme – one of only a handful of environmental schemes to be chosen for this honour. This means that award winners have the opportunity to gain further accolades on the international stage, as they are automatically given access to the European Business Awards for the Environment.

DHL Supply Chain already manages inbound deliveries at Gatwick Airport through its logistics and consolidation facility on behalf of the airport’s 150 partners and retailers. 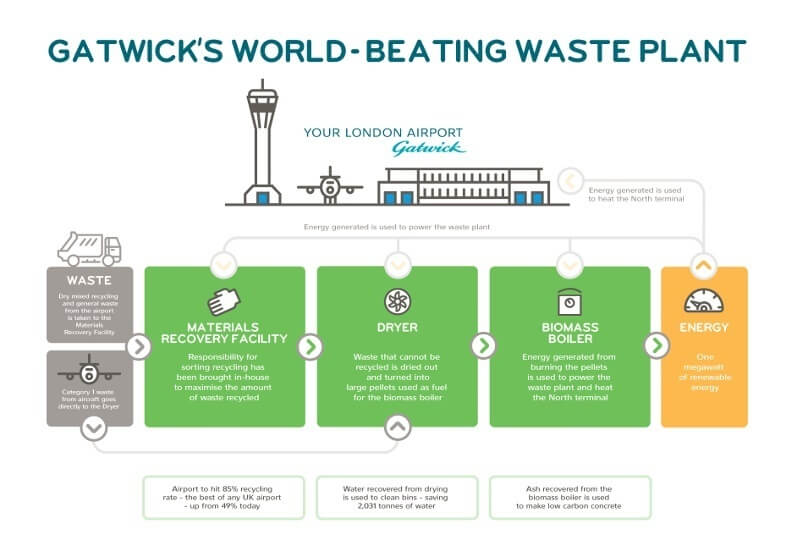 Gatwick Airport is the UK’s second largest airport and the most efficient single-runway airport in the world. It serves more than 220 destinations in 80 countries for 42 million passengers a year on short and long-haul point-to-point services. It is also a major economic driver for the South East region, generating around 21,000 on-airport jobs and a further 10,000 jobs through related activities. The airport is south of Central London with excellent public transport links, including the Gatwick Express, and is part of the Oyster contactless payment network. Gatwick Airport is owned by a group of international investment funds, of which Global Infrastructure Partners is the largest shareholder.

Recognized as world leader for corporate action on climate change

Keilaranta, Finland, October 25, 2016: For the first time, Neste has reached the Carbon Disclosure Project’s (CDP) highest Climate A List. This recognition is due to Neste’s work in combating climate change. Of the thousands of companies involved in the climate change program, only 193 made it onto the list. Only five of all companies awarded a position on the ‘A List’ represent the energy sector, which highlights Neste’s exceptional role and actions within its industry on climate change. Of the energy sector players, Neste is the only company from the Nordics included in the A-list.

The ‘A List’ recognizes companies that were considered to have most effectively tackled climate change, and adapted to it. Companies had to achieve over 75 percent of the total score in all the areas evaluated, including “Leadership”. The reporting of ‘A List’ companies on climate emissions also had to be public and sufficiently comprehensive, as well as for the most part certified by an independent third party, in accordance with an approved certification standard.

Neste is the world’s leading developer of low-carbon solutions for road and air traffic, as well as the chemical and plastics industries worldwide. “We support the Paris Agreement by operating more efficiently. But our major impact in climate change mitigation is achieved through offering our top-quality, drop-in solutions for a low-carbon society,” says Neste’s Senior Sustainability Advisor Pekka Tuovinen. “By refining high-quality renewable fuels, last year we helped our customers cut their greenhouse gas emissions by as much as 6.4 million tons. Our aim is to increase this figure to 9.0 million tons,” says Tuovinen.

“We congratulate the 193 A List companies that are leading the change towards our low carbon future. Companies are key actors in enabling the global economy to achieve its new climate goals, and the leadership of this group points the way for others to take bold action and capitalize on the many opportunities that await,” says CDP’s Chief Executive Officer Paul Simpson.

The Carbon Disclosure Project is an international non-profit organization that supports sustainable economic development. Thousands of companies take part in CDP’s annual Climate evaluation. Neste is among the nine percent selected on CDP’s Climate A List. Based on the previous year’s emission reporting, the list includes 14 Nordic companies. Six (including Neste) are from Finland, four from Sweden, three from Denmark and one from Norway. The list is available on the CDP website.

Atlanta, September 20, 2016:  Since 2012, Delta Air Lines has achieved carbon-neutral growth on all emissions – domestic flying, international flying and ground operations. To accomplish that goal, the airline improved aircraft fuel efficiency, invested in electric-powered tugs and explored the carbon market, all the while ensuring its carbon emissions did not exceed 2012 levels. The airline is currently the only U.S. carrier committed to carbon-neutral growth.

“For airlines, this can be done by reducing carbon emissions, through sustainable choices like investing in more fuel-efficient aircraft, removing unnecessary weight before flight and making sure the right plane is flying the right route,” said Christine Boucher, Delta’s Managing Director – Global Environment, Sustainability & Compliance.

But as flying continues to increase, fuel efficiency alone often isn’t enough to keep carbon emissions down. That’s when airlines opt to buy carbon offsets. Carbon offsets directly fund projects that reduce greenhouse gas emissions, like planting trees and preventing deforestation in the Amazon. “We purchase offsets as a company, but go one step further, offering customers an opportunity to get involved,” Boucher said.

Delta was the first U.S. carrier to offer customers a carbon offset program in 2007. This program gives customers not only the opportunity to evaluate the environmental impact of their flight but also a chance to take action. “Since 2012 Delta has joined its customers in offsetting our growth in carbon emissions, and through 2015 we will have purchased nearly 4 million offsets,” Boucher said. “That makes Delta one of the largest purchasers of voluntary carbon offsets.”

Not surprisingly, Delta’s biggest environmental impact comes from burning jet fuel, which accounts for 99 percent of its carbon footprint. However, the airline has made strides in lowering its total carbon emissions, reducing by 14 percent since 2005.

These achievements and others are highlighted in Delta’s 2015 Corporate Responsibility Report. The report explores the airline’s environmental commitment, community involvement, employee relations, operational accountability and financial performance throughout last year. It can be accessed online at delta.com/responsibility.

Delta’s unique fleet strategy is highlighted in the Corporate Responsibility Report as an important component of how the airline has strengthened its financial performance while investing in more fuel-efficient aircraft, like the Airbus A321. Delta has decreased fuel burn per available seat mile by 6 percent since 2008. The report elaborates on plans to phase out some of the airline’s less fuel-efficient planes, like the Boeing 747 which will be retired by 2017, and move forward with an upgauging program that has eliminated 60 percent of the 50-seater product.

In the introductory letter, Delta’s CEO Ed Bastian said, “This report tells the story of our ongoing commitment to being a good steward of the environment, a positive force in the communities we serve, and a great place to work and fly. Sustainability is driving us forward and will be a key element in Delta’s continued success.”