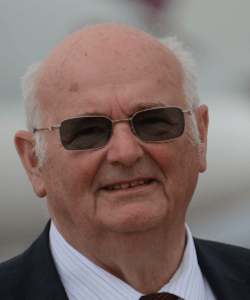 Born 1943 in Bonn, Germany, Rolf Doerpinghaus studied physics at the University of Cologne and pursued a parallel career as a science and aerospace writer in the early 1970s. After working for various German defense, space, maritime and environmental publications, Rolf Doerpinghaus became managing editor of ‘aerokurier’ in 1976 and was appointed editor-in-chief in 1978. In addition to leading ‘aerokurier’, Rolf Doerpinghaus became the founding editor of ‘Luftwaffen-Forum’ – at that time the official publication of the ‘Freundeskreis Luftwaffe’ (German Air Force Association) and today part of ‘FLUGREVUE’ (Motor Presse Stuttgart). He also assumed the responsibility of managing editor of the ‘Lufthansa Yearbook’ on behalf of Lufthansa and Verlag Dr. Neufang KG.

During his time as editor-in-chief, Rolf Doerpinghaus contributed to the formation of AERO, The Global Show of General Aviation (Messe Friedrichshafen) and – together with MdB Ferdinand (Ferdi) Tillmann – to the formation of the German ‘Forum Luft- und Raumfahrt’.

In 1993, Doerpinghaus was appointed head of the press department of the German Aerospace Industries Association (BDLI) with additional responsibilities for ILA Berlin Air Show before establishing RD AeroSpace Consult, Bonn, to start his own career as an independent aerospace consultant in 1995.

As the Senior Aerospace Advisor to the ILA Berlin Air Show from 1995 to 2012, Doerpinghaus has been instrumental in shaping the development of ILA into one of the most acclaimed international aerospace trade and conference events. He also created among other innovative products the ILA HeliCenter and ILA’s International Suppliers Center ISC.

Additionally, he advised the business development organizations of several German states and the management of airports such as Dresden and Leipzig (in cooperation with Prof. Heinz Ruhnau, former CEO of Lufthansa) on expansion and marketing strategies. He also set up several aerospace conferences on environmental, safety, security and air transport topics as well as international aerospace workshops. Other activities included airshows and aerospace conferences in China, Japan, Canada and Argentina.

At the end of 2013, Doerpinghaus was elected president of the newly founded International Association for Sustainable Aviation (IASA e. V.).