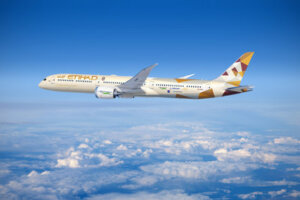 SEATTLE, July 20, 2020 /PRNewswire/ — Boeing [NYSE:BA] and Etihad Airways will use a 787-10 Dreamliner to test ways to reduce emissions and noise as part of the aerospace company’s ecoDemonstrator program before the airline accepts delivery of the airplane this fall. The collaboration, which includes extensive sound measurement testing with industry partners, builds on a strategic sustainability alliance Boeing and Etihad formed in November 2019. 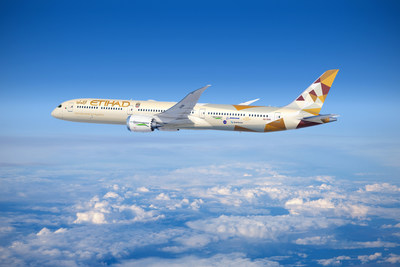 “This is the latest program under Etihad’s industry-leading strategic partnership with Boeing, focusing on innovating real-world solutions to the key sustainability challenges facing the aviation industry,” Etihad Aviation Group Chief Executive Officer Tony Douglas said. “The ecoDemonstrator program is founded on innovation and sustainability — and these are core values for Etihad Airways, Abu Dhabi and the United Arab Emirates. Etihad and Boeing see a great opportunity to collaborate and share knowledge to minimize the impact of aviation on the environment.”

The ecoDemonstrator program utilizes commercial aircraft to test technologies that can make aviation safer and more sustainable now and into the future. The 2020 program, which will begin testing in August, is the first to use a Boeing 787-10.

“Industry collaboration is a key aspect of Boeing’s ecoDemonstrator program that enables us to accelerate innovation,” said Stan Deal, Boeing Commercial Airplanes president and CEO. “We’re proud to broaden our sustainability partnership with Etihad Airways by testing promising technologies that can reduce emissions, help commercial aviation meet our climate goals, and allow the industry to grow in a responsible manner that respects our planet and its natural resources.”

Boeing and Etihad will work with industry-leading partners, including NASA and Safran Landing Systems, to conduct aircraft noise measurements from sensors on the airplane and the ground. The data will be used to validate aircraft noise prediction processes and the sound reduction potential of aircraft designs, including landing gear, that are modified for quieter operations.

In addition, a flight will be conducted during which pilots, air traffic controllers and an airline’s operations center will simultaneously share digital information to optimize routing efficiency and enhance safety by reducing workload and radio frequency congestion.

Test flights will be flown on a blend of sustainable fuel, which significantly lowers aviation’s environmental footprint. The testing program is expected to last about four weeks before Etihad enters its Boeing 787-10 into service. 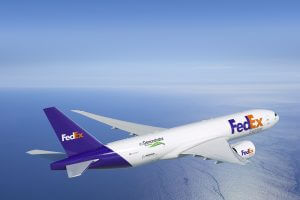 Industry leaders working together and flight testing aboard a 777 Freighter

Seattle, July 6, 2017: As part of the continuing effort to accelerate aerospace innovation, Boeing and FedEx Express, a subsidiary of FedEx Corp. and the world’s largest express transportation company, will work together to fly the next ecoDemonstrator. Starting in 2018, a new Boeing 777 Freighter made for FedEx Express will test emerging technologies, such as propulsion advancements and flight deck innovations.

The ecoDemonstrator program, now in its fifth iteration, serves as a series of flying testbeds designed to improve the environmental performance and safety of future airplanes.

“The ecoDemonstrator program is focused on harvesting exciting new technologies that will benefit our airline customers, the flying public and the environment,” said Mike Sinnett, vice president of Boeing Commercial Airplanes Product Development.

The collaboration on the newest ecoDemonstrator project is the latest in a 38-year relationship between Boeing and FedEx.

“FedEx is committed to developing and implementing innovative solutions that connect the world responsibly and resourcefully,” said David Cunningham, president & CEO, FedEx Express. “We’re proud to work with Boeing and use our 777 Freighter to play a key role in bringing future benefits to the entire aviation industry.”

This round of ecoDemonstrator testing includes installing a compact thrust reverser developed by Boeing designed to save fuel and reduce emissions, flight deck improvements that can improve efficient operations in and out of busy airports, and flying prototype airplane parts using cutting-edge manufacturing techniques that reduce material waste. 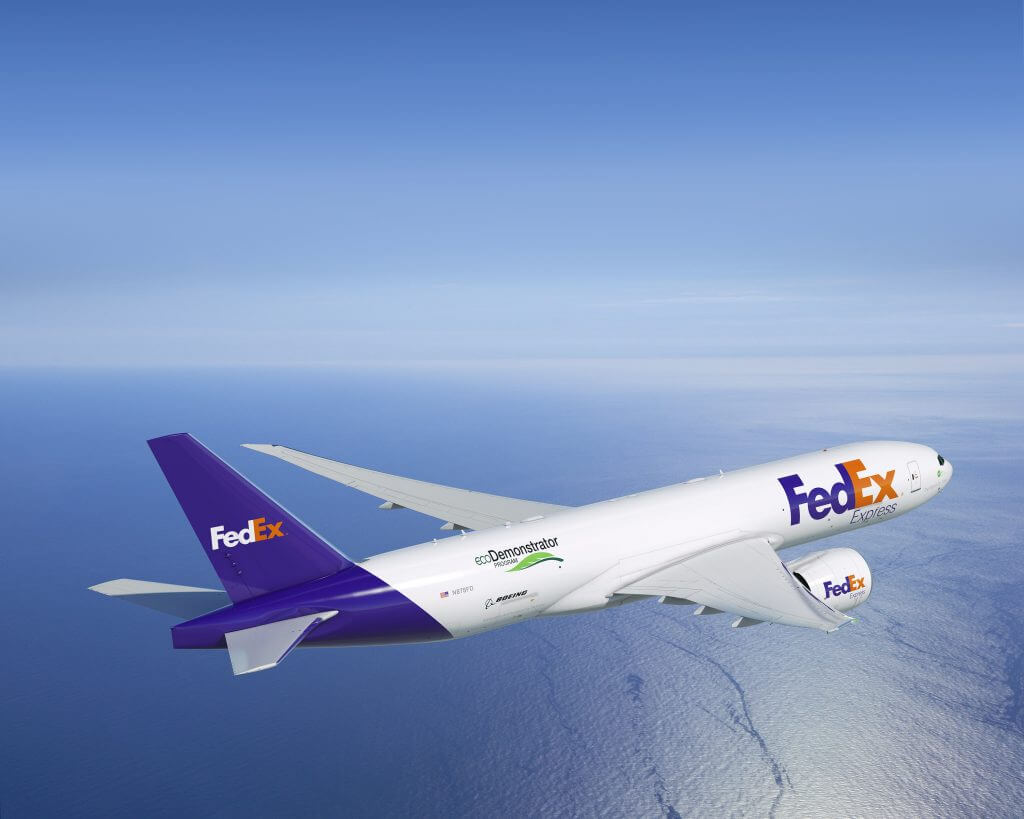 Flight testing is scheduled to last approximately three months before the airplane returns to the FedEx fleet. 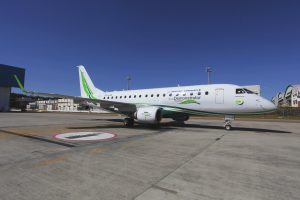 An Embraer E170 will serve as the flying testbed and will feature advanced environmental technologies that will undergo operational testing in Brazil during August and September.

“Collaborating with Boeing on the ecoDemonstrator program in the structuring and implementation of new technologies tests reinforces, once again, Embraer’s commitment towards a sustainable future,” said Mauro Kern, Executive Vice President of Operations at Embraer. “At the same time, as we integrate and test different technologies in a single aircraft, we contribute to consolidate in Brazil a powerful tool to support technological development and innovation – the technology demonstrator platform.”

“As industry leaders, we have a unique opportunity to invest in technologies that encourage our industry’s long-term, sustainable development, while supporting our customers’ environmental goals,” said Boeing Chief Technology Officer John Tracy.

The ecoDemonstrator flights will test several technologies designed to reduce carbon emissions, fuel use and noise including:

The ecoDemonstrator collaboration expands a relationship that began in 2012 when Boeing and Embraer signed a cooperation agreement to benefit their customers, their companies and the global aviation industry. Since then, Boeing and Embraer have supported Embraer’s KC-390 defense aircraft program and improved runway safety by providing commercial customers with tools to reduce runway excursions. Last year Boeing and Embraer opened a joint biofuel research center in São José dos Campos to perform biofuel research and coordinate research with Brazilian universities and other institutions. 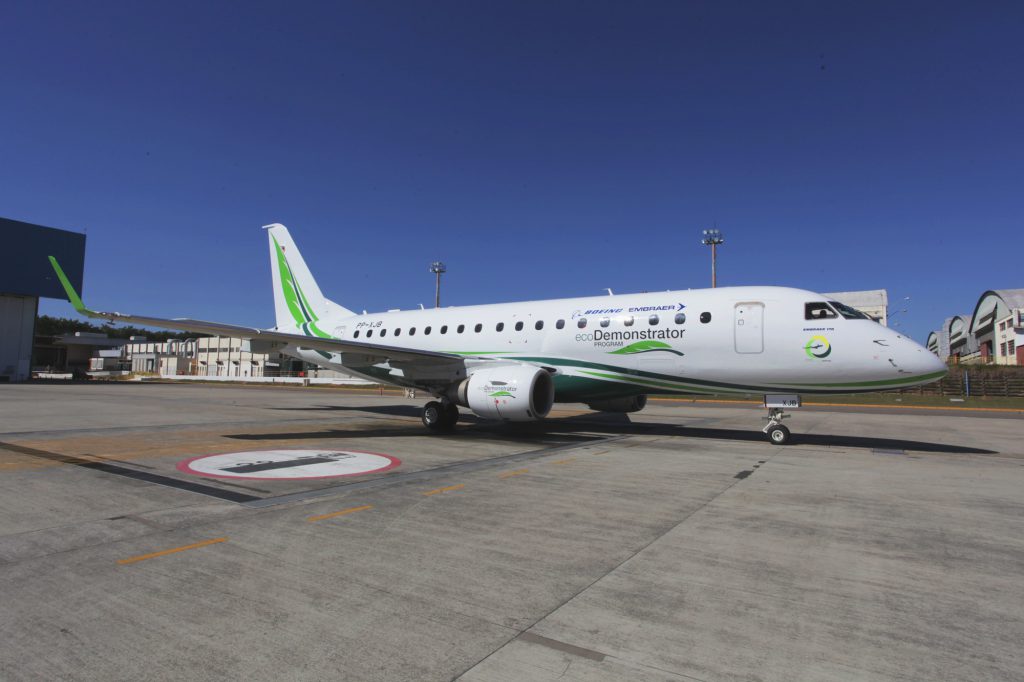 Boeing and Embraer unveiled the next phase of the Boeing ecoDemonstrator program. The program expands Boeing and Embraer’s cooperation agreement and will test technologies to improve airplane environmental performance and accelerate their introduction into the marketplace