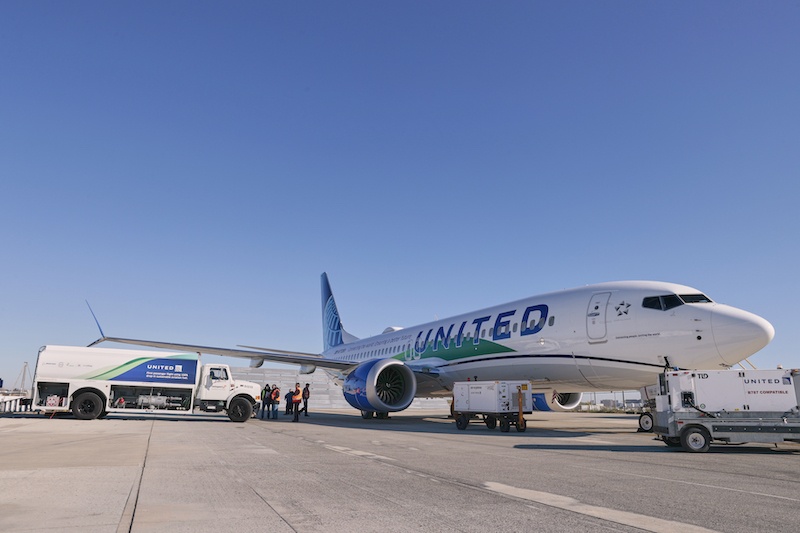 CHICAGO – December 1, 2021 – United today will operate an unprecedented flight that will serve as a turning point in the industry’s effort to combat climate change: for the first time in aviation history, a commercial carrier will fly an aircraft full of passengers using 100% sustainable aviation fuel (SAF). Also today, United announced the second round of corporate participants in the airline’s Eco-Skies AllianceSM program to collectively contribute towards the purchase of SAF.

United is the world leader in the usage and support for the development of SAF, an alternative fuel made with non-petroleum feedstocks, already having agreements to purchase nearly twice as much SAF as the known agreements of all other global airlines combined. SAF has the potential to deliver the performance of petroleum-based jet fuel but with a fraction of its carbon footprint, and according to the U.S. Department of Energy, the country’s vast feedstock resources are enough to meet the projected fuel demand of the entire U.S. aviation industry.

“United continues to lead from the front when it comes to climate change action,” said United CEO Scott Kirby, who will fly onboard today’s historic SAF flight. “Today’s SAF flight is not only a significant milestone for efforts to decarbonize our industry, but when combined with the surge in commitments to produce and purchase alternative fuels, we’re demonstrating the scalable and impactful way companies can join together and play a role in addressing the biggest challenge of our lifetimes.”

The demonstration flight – which will depart today with more than 100 passengers from Chicago’s O’Hare International Airport and land at Washington, D.C.’s Reagan National Airport – will be on a new United 737 MAX 8 and use 500 gallons of SAF in one engine and the same amount of conventional jet fuel in the other engine to further prove there are no operational differences between the two and to set the stage for more scalable uses of SAF by all airlines in the future. Currently, airlines are only permitted to use a maximum of 50% SAF on board. The SAF used on today’s flight is drop-in ready and compatible with existing aircraft fleets.

United is operating this unprecedented flight in partnership with Boeing, CFM International*, Virent – a subsidiary of Marathon – whose technology enables 100% drop-in SAF, and World Energy – the world’s first and North America’s only commercial SAF producer. United’s Kirby will be joined by executives from each of those companies on today’s flight along with other business leaders, government officials, NGOs and members of the media.

“Boeing is proud to support United on this historic event as we work together to make aviation more sustainable,” said Ihssane Mounir, Senior Vice President of Sales and Marketing for The Boeing Company. “As an industry, we are committed to addressing climate change, and sustainable aviation fuels are the most measurable solution to reduce aviation carbon emissions in the coming decades. No one entity can decarbonize aviation alone and it will require partnerships like this to ensure aviation is safe and sustainable for future generations.”

“We are honored to be part of this landmark event,” said Gaël Méheust, president & CEO of CFM International. “Drop-in SAF is something our industry can adopt now to begin making inroads on our commitment to be net zero carbon emissions by 2050. Along with our parent companies, GE Aviation and Safran Aircraft Engines, we applaud United for taking this bold initiative and look forward to even greater cooperation in the future.”

“We’re excited to partner with this group of innovative companies that are leading the way in sustainable aviation,” said Dave Kettner, president and general counsel of Virent. “Virent’s proprietary technology demonstrates that SAF can be 100% renewable and 100% compatible with our current aviation fleet and infrastructure. We are proud to be playing a role in this advancement toward sustainable aviation fuels.”

“When we fly, we connect, and our demand for the connections aviation makes possible are only going to grow,” said Gene Gebolys, CEO of World Energy. “But we need to develop affordable, high energy density, low-carbon liquid fuels at scale everywhere to allow those connections to be made sustainably. The pioneering work is the hardest work, and United has been with us from the very start. The flight path ahead will require tremendous teamwork. We are fortunate to have partners like United to do that work and are thrilled to be a part of this important milestone today.”

United’s Eco-Skies Alliance program was launched in April 2021 and now has collectively contributed toward the purchase of more than 7 million gallons of SAF this year alone. With its nearly 80% greenhouse gas (GHG) emissions reductions on a lifecycle basis compared to conventional jet fuel, this is enough SAF to eliminate approximately 66,000 metric tons of GHG emissions, or enough to fly passengers more than 460 million miles. Including today’s newly announced participants, the program has nearly 30 participants including companies like DHL Global Forwarding, HP Inc. and Nike.

The new participants include:

Today’s SAF flight and new Eco-Skies Alliance participants are among the latest accomplishments towards United’s goal to be 100% green by reducing its GHG emissions 100% by 2050, without relying on traditional carbon offsets. In a further step to build transparency and enable certified SAF emissions reductions for its corporate customers, last month United partnered with Microsoft, Air bp, and the Roundtable on Sustainable Aviation Biomaterials in the first ever book-and-claim pilot