Washington, D.C., February 24, 2016: NASA and the Republic of Korea are developing plans for a cooperative field study of air quality in May and June to advance the ability to monitor air pollution accurately from space.

The Korea U.S.-Air Quality study (KORUS-AQ) will assess air quality across urban, rural and coastal areas of South Korea using the combined observations of aircraft, ground sites, ships and satellites. Findings will play a critical role in the development of observing systems of ground and space-based sensors and computer models to provide improved air quality assessments for decision makers.

A new field study this May and June seeks to advance NASA’s ability to monitor air quality from space. This 2007 NASA satellite image shows a swath of air pollution sweeping east across the Korean peninsula to Japan. Credits: NASA

“KORUS-AQ is a step forward in an international effort to develop a global air quality observing system,” said James Crawford, a lead U.S. scientist on the project from NASA’s Langley Research Center in Hampton, Virginia. “Both of our countries will be launching geostationary satellites that will join other satellites in a system that includes surface networks, air quality models, and targeted airborne sampling.”

Air quality is a significant environmental concern in the United States and around the world. Scientists are trying to untangle the different contributors to air quality, including local emissions from human activities, pollution from far away, and natural sources such as seasonal fires and wind-blown dust.

South Korea’s capital, Seoul, is one of the globe’s five most-populated metropolitan areas. Because of the country’s varied topography and its location close to both rapidly industrializing mainland China and the ocean, the impacts associated with the many factors controlling air quality are larger and often easier to measure over the Korean peninsula than elsewhere.

“Working with our South Korean colleagues on KORUS-AQ, we will improve our understanding of the detailed factors controlling air quality, how the processes interact, and how they are changing over time,” Crawford said.

In accordance with an agreement NASA recently completed with South Korea’s National Institute of Environmental Research, Korean scientists will collect KORUS-AQ observations on the ground and in the air with a King Air aircraft from Hanseo University in Seosan. To take data during the experiment, NASA will contribute a DC-8 flying laboratory from the agency’s Armstrong Flight Research Center in Edwards, California, and a Beechcraft UC-12B King Air from Langley.

Two NASA research aircraft, the UC-12B (top) and the DC-8, will gather atmospheric data across urban, rural and coastal areas of South Korea to help improve the ability to monitor air pollution from space. Credits: NASA

Five South Korean instruments will be part of the DC-8 payload and one NASA instrument will be onboard the Hanseo aircraft. NASA’s DC-8 will conduct eight-hour flights to make direct measurements of the atmosphere from altitudes up to 25,000 feet. The NASA King Air will fly overhead with remote-sensing instruments that simulate satellite observations. The Hanseo King Air will make direct atmospheric measurements focusing on areas less accessible to the larger DC-8. Scientists and air quality modelers from both countries will work together to plan the aircraft flights and analyze the measurements.

South Korea maintains an extensive ground-based, continuous air-quality monitoring network of more than 300 sites. Almost half of the sites are in the Seoul area and just over 80 percent are in urban areas. South Korea will host NASA instruments at some of the monitoring sites that are being enhanced for KORUS-AQ.

NASA uses the vantage point of space to increase our understanding of our home planet, improve lives, and safeguard our future. NASA develops new ways to observe and study Earth’s interconnected natural systems with long-term data records. The agency freely shares this unique knowledge and works with institutions around the world to gain new insights into how our planet is changing. For more information about NASA Earth science research, please visit: http://www.nasa.gov/earth

Results will lead to a refinement of global sea level budgets

Washington, D.C., February 11,2016: New measurements from a NASA satellite have allowed researchers to identify and quantify, for the first time, how climate-driven increases of liquid water storage on land have affected the rate of sea level rise.

A new study by scientists at NASA’s Jet Propulsion Laboratory (JPL) in Pasadena, California, and the University of California, Irvine, shows that while ice sheets and glaciers continue to melt, changes in weather and climate over the past decade have caused Earth’s continents to soak up and store an extra 3.2 trillion tons of water in soils, lakes and underground aquifers, temporarily slowing the rate of sea level rise by about 20 percent.

The water gains over land were spread globally, but taken together they equal the volume of Lake Huron, the world’s seventh largest lake. The study is published in the Feb. 12 issue of the journal Science.

Each year, a large amount of water evaporates from the oceans, falls over land as rain or snow, and returns to the oceans through runoff and river flows. This is known as the global hydrologic, or water, cycle. Scientists have long known small changes in the hydrologic cycle — by persistent regional changes in soil moisture or lake levels, for instance — could change the rate of sea level rise from what we would expect based on ice sheet and glacier melt rates. However, they did not know how large the land storage effect would be  because there were no instruments that could accurately measure global changes in liquid water on land.

“We always assumed that people’s increased reliance on groundwater for irrigation and consumption was resulting in a net transfer of water from the land to the ocean,” said lead author J.T. Reager of JPL, who began work on the study as a graduate student at UC Irvine. “What we didn’t realize until now is that over the past decade, changes in the global water cycle more than offset the losses that occurred from groundwater pumping, causing the land to act like a sponge — at least temporarily. These new data are vital for understanding decadal variations in sea level change. The information will be a critical complement to future long-term projections of sea level rise, which depend on melting ice and warming oceans.”

The 2002 launch of NASA’s Gravity Recovery and Climate Experiment (GRACE) twin satellites provided the first tool capable of quantifying land liquid water storage trends. By measuring the distance between the two GRACE satellites to within the width of a strand of human hair as they orbit Earth, researchers can detect changes in Earth’s gravitational pull that result from regional changes in the amount of water across Earth’s surface. With careful analysis of these data, JPL scientists were able to measure the change in liquid water storage on the continents, as well as the changes in ice sheets and glaciers.

“These results will lead to a refinement of global sea level budgets, such as those presented in the Intergovernmental Panel on Climate Change (IPCC) reports, which acknowledge the importance of climate-driven changes in hydrology, but have been unable to include any reliable estimate of their contribution to sea level changes,” said JPL senior water scientist Jay Famiglietti, senior author of the paper and a professor at the University of California, Irvine.

Famiglietti also noted the study is the first to observe global patterns of changes in land water storage, with wet regions getting more wet and dry areas getting drier.

NASA uses the vantage point of space to increase our understanding of our home planet, improve lives and safeguard our future. NASA develops new ways to observe and study Earth’s interconnected natural systems with long-term data records. The agency freely shares this unique knowledge and works with institutions around the world to gain new insights into how our planet is changing. For more on NASA’s sea level rise research please visit: https://sealevel.nasa.gov/ 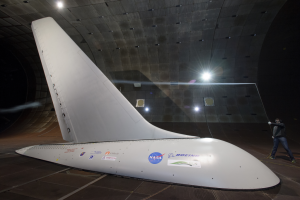 Washington, D.C., January 4,21016: U.S. and other airlines could realize more than $250 billion dollars in savings in the near future thanks to green-related technologies developed and refined by NASA’s aeronautics researchers during the past six years.

These new technologies, developed under the purview of NASA’s Environmentally Responsible Aviation (ERA) project, could cut airline fuel use in half, pollution by 75 percent and noise to nearly one-eighth of today’s levels.

“If these technologies start finding their way into the airline fleet, our computer models show the economic impact could amount to $255 billion in operational savings between 2025 and 2050,” said Jaiwon Shin, NASA’s associate administrator for aeronautics research.

Created in 2009 and completed in 2015, ERA’s mission was to explore and document the feasibility, benefits and technical risk of inventive vehicle concepts and enabling technologies that would reduce aviation’s impact on the environment. Project researchers focused on eight major integrated technology demonstrations falling into three categories:

By the time ERA officially concluded its six-year run, NASA had invested more than $400 million, with another $250 million in-kind resources invested by industry partners who were involved in ERA from the start.

“It was challenging because we had a fixed window, a fixed budget, and all eight demonstrations needed to finish at the same time,” said Fayette Collier, ERA project manager. “We then had to synthesize all the results and complete our analysis so we could tell the world what the impact would be. We really did quite well.”

Here is a brief summary of each of the eight integrated technology demonstrations completed by the ERA researchers: 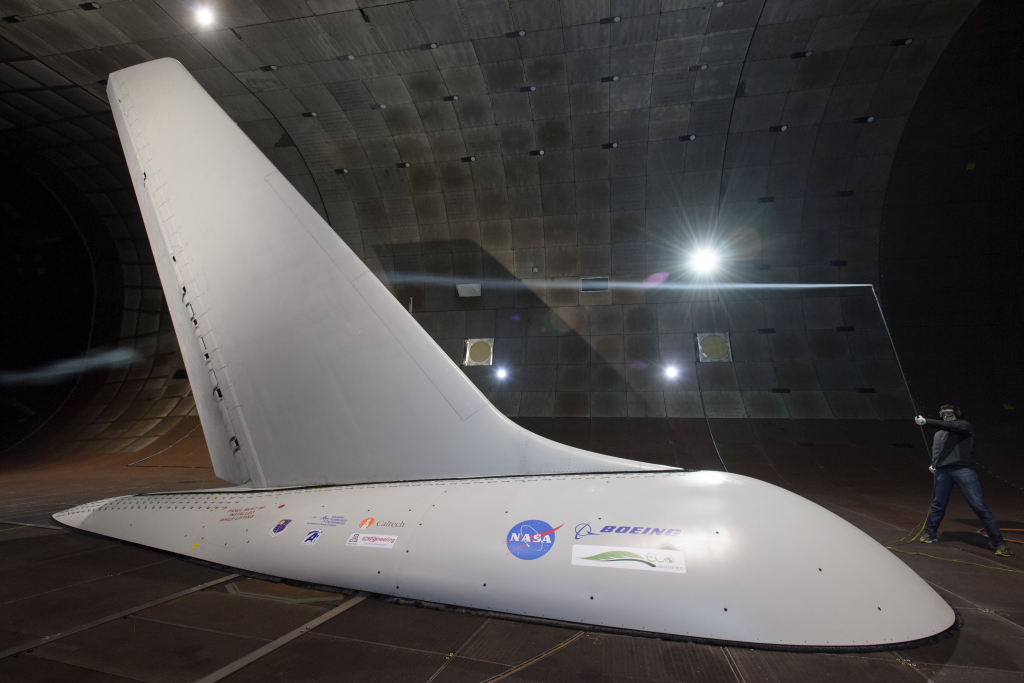 Researchers with NASA’s Environmentally Responsible Aviation project coordinated wind-tunnel tests of an Active Flow Control system — tiny jets installed on a full-size aircraft vertical tail that blow air — to prove they would provide enough side force and stability that it might someday be possible to design smaller vertical tails that would reduce drag and save fuel. Credits: NASA/Dominic Hart

As part of the closeout work for the ERA project, information and results regarding each of these technology demonstrations were categorized and stored for future access and use by the aerospace industry, and will be discussed at the American Institute of Aeronautics and Astronautics Sci-Tech Conference in San Diego this week.For more information about NASA aeronautics research, go to http://www.nasa.gov/aeronautics